Born on November 11, 1839, Frank Furness was the son of a prominent Philadelphia clergyman and abolitionist, William Henry Furness. Frank elected to take up the study of architecture, apprenticing in New York under the famed architect Richard Morris Hunt. Instead of doing what most of his peers did, twenty-two year old Frank Furness did not flee to Europe to avoid military service. Instead, he enlisted in Company I of the Sixth Pennsylvania Cavalry and was quickly commissioned lieutenant. After a successful stint as a staff officer, on January 11, 1864, he was promoted to captain and assigned to command Company F. 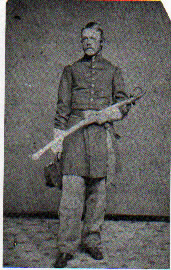 Furness still commanded Company F in June 1864, when two divisions of the Cavalry Corps, now commanded by Maj. Gen. Philip H. Sheridan, went on an extended raid in the direction of Gordonsville, marching along the route of the Virginia Central Railroad. Departing from the main body of the Army of the Potomac on June 7, Sheridan’s force marched slowly west, arriving at Trevilian Station, in Louisa County, on the night of June 10. A heavy engagement on June 11 was indecisive, and the foes resumed the fighting on the afternoon of June 12.

The Confederate cavalry, positioned behind strong breastworks marked by a “Bloody Angle”, had a strong defensive position. The Federal cavalry launched seven desperate assaults on the Bloody Angle before a severe counterattack crashed into the Union flank, driving it from the field in confusion. The Sixth Pennsylvania Cavalry held the end of the Union line. Positioned among the various outbuildings of the Gentry farm, perched atop a ridge, Furness’s Company F was the endmost company on the Union line. What follows is Furness’s narrative of his deeds that day:

“On the afternoon of June 12th, 1864, the Reserve Brigade was engaged dismounted shortly after midday near Trevilian Station, Virginia. The Brigade had been actively been engaged in the battle of Trevilian Station, on the day previous, June 11th, 1864.

The Brigade was commanded by Colonel Alfred Gibbs, the Division by General Wesley Merritt.

The orders received by Officers commanding Regiments were to hold the ground at all hazards; it has since been learned that the ammunition which General Sheridan had with him on his raid was almost exhausted and it was necessary that a demonstration should be made in order to keep the enemy fully occupied until after dark when General Sheridan had concluded to continue his raid.

In front of the portion of the line occupied by the 6th Penna. Cavalry, about 50 yards in advance of the established line, was a farm house and out buildings; Captain Furness’s command occupied some of the out buildings. The Confederates occupied the house and the out buildings not occupied by the 6th Penna. Cavalry. It was a matter of the greatest importance that this position should be held for if it had been occupied by the Confederates our entire Federal line would have suffered. Therefore an outpost, so to speak, was established by the Commanding Officers of the 6th Penna. Cavalry occupying the outbuildings which particularly commanded the Federal line. At this particular spot the fighting was desperate although the entire line was fiercely engaged. The space between the house and outbuildings above alluded to, was entirely clear and open, it being a great field.

This was the position of affairs and some two hours after the time when the line first became hotly and fiercely engaged, that Captain Furness received word from the Outpost, above mentioned, through a non-commissioned officer, who crawled on his hands and knees through the grass from the Outpost to the main line, that the ammunition was almost exhausted and that if more was not immediately supplied the Outpost was in immediate danger of capture by the Confederates.

Captain Furness caused two boxes of ammunition to be taken from his already scanty supply and placing one on his head asked what officer or man would volunteer to carry the other Captain Walsh Mitchell at once seized the other, likewise placing it on his head, said that he would cheerfully follow Captain Furness. The two officers ran across the open space between the Outpost and the main line in clear sight of the Confederates and safely deposited the ammunition at the disposal of the Officer commanding the outpost, rendering it possible by carefully husbanding the ammunition, for the Outpost to hold its position, saving the Main Line from severe loss, which it did until long after dark.

Whether or not it was the Confederates were amazed at the audacity of the two officers carrying the ammunition, for some reason the fire encountered by the two officers on their return trip to the Main Line was very much fiercer than on the former one. The air seemed filled with lead, Captain Mitchell remarking to Captain Furness, ‘For God’s sake run zigzag so they can’t draw a bead on you.’ The words were no sooner out of Capt. Mitchell’s mouth than he received a bullet through the top of his cap and another through the skirt of his coat.

With no other damages than this Captain Furness and Captain Mitchell regained the Main Line of Battle.

As before stated the regiment remained holding its position, in spite of shot and shell, for they were vigorously subjected to these annoyances, until long after dark, and it was not until long after dark (through some oversight on the part of the Brigade commander no orders for withdrawal were received by the Officer Commanding the 6th Penna. Cavalry) the men crouching down and carefully holding their sabres and carbines to avoid all rattle, so close was the proximity of the enemy, did the 6th Penna. Cavalry rejoin General Sheridan’s command, finding their remounts and taking up the line of march, continuing the same throughout the remainder of the night and until the afternoon of the next day.”

Furness served out his term of enlistment and was discharged from the 6th Pennsylvania Cavalry in the fall of 1864. Returning home to Philadelphia, he resumed his architecture career, designing nearly 650 buildings and becoming one of the highest paid architects of the time. Employing an approach based on the theory that architecture was more than just building, Furness employed a heavy Gothic style that was quite unique. Click to see some of Furness’s works. In a Victorian Age noted for its aggressive architecture, Furness’s buildings were certainly among the most boisterous and challenging.

Working mostly between 1870 and 1895, his designs include some of Philadelphia’s most prominent structures such as the Philadelphia Zoo Gatehouses, the Pennsylvania Academy of Fine Arts, and the Merion Cricket Club. [links to the two books on Furness’s works] He co-founded the Philadelphia chapter of the AIA, and is known as the founder of the so-called “Philadelphia School” or architecture. One of his most interesting designs is the handsome monument to the Lancers that graces the battlefield at Gettysburg, and which features full-scale replicas of the lances carried by the men of the regiment for the first year and a half of the war.

In 1899, Furness applied for a Medal of Honor. With the ringing endorsement of Maj. Gen. Wesley Merritt and Col. Albert P. Morrow, two veteran cavalry officers, and St. Clair Mulholland, the former commander of the Irish Brigade, Furness was awarded the Medal in September 1899 in recognition of his gallant service at Trevilian Station on June 12, 1864. The citation reads:

“On this occasion, a detachment occupying an exposed and isolated outpost having expended its ammunition, Captain Furness, carrying a box of ammunition on his head, ran to the outpost across an open space that was swept by a fierce fire from the enemy. This ammunition together with that carried by another officer who had responded to Captain Furness’s call for volunteers, enabled the detachment to hold its position until nightfall, thus saving the main line from severe loss.”

Although he is considered the first “All-American” architect, Furness eventually fell from favor. When he died in 1912, his work was largely forgotten. He was buried in Philadelphia’s Laurel Hill Cemetery. 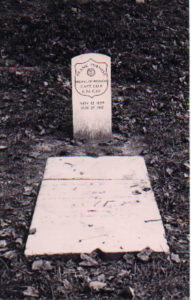 Aside from his great contribution on June 12, 1864, Furness made another great contribution to American culture. Over his long career in architecture, Furness was known for his daring and innovative designs.  Accordingly, Furness’s work attracted attention as well as other eager young architects. Furness’s most famous student was Louis Henry Sullivan, best known as the architect of New York’s famous Chrysler Building. Sullivan’s most prominent student was Frank Lloyd Wright, the greatest of all American architects. A review of Wright’s early work shows the clear link to the groundbreaking work of Frank Furness, Philadelphia’s fighting architect.