THE FORMATION OF THE SIXTH PENNSYLVANIA CAVALRY

When the Civil War broke out, a wave of patriotic fervor crashed over the city of Philadelphia.  In the opening months of the war, 41 regiments of infantry, 5 batteries of artillery, and 12 regiments of cavalry were formed, with the men signing up for three year terms of service.  Nearly 100,000 men answered the initial calls for volunteers.[1]  The 6th Pennsylvania was formed in Philadelphia during the late summer and early fall of 1861 as one of the Commonwealth of Pennsylvania’s first contributions to the Civil War.  The men represented both major political parties, although more of them were Republicans than were Democrats.[2] Many of its officers had served in an elite militia unit called the Philadelphia City Troop, an organization that traced its roots to the American Revolution.  The original First City Troop, as it was known during the Revolution, served as George Washington’s bodyguard.  The next generation of troopers served with distinction during the War of 1812.  Membership in the First City Troop was by election only, and was highly desired by members of the city’s social elite.

The regiment’s political patron was Clement Biddle Barclay, a member of the prominent Biddle and Barclay families of Philadelphia and New York.  Barclay, who was a member of the First City Troop, had great political influence with Pennsylvania Governor Andrew Gregg Curtin, serving as an unofficial aide to the governor and good-will ambassador to the troops.  Barclay used his considerable influence to assist in forming, organizing, and outfitting this new regiment, raised money to aid in arming it, and used his fortune to look after the comfort of its troops.  His indelible fingerprint stayed on the regiment throughout its service.[3]

At age 37, Col. Richard H. Rush was a good choice to command the new regiment—he graduated as a member West Point’s legendary class of 1846, along with fellow Philadelphians George B. McClellan and John Gibbon, Virginians Thomas Jonathan “Stonewall” Jackson, Ambrose Powell Hill, and George E. Pickett, as well as a number of other officers who achieved the rank of general during the Civil War.[4]  Rush was also a grandson of Benjamin Rush of Philadelphia, a signer of both the Declaration of Independence and the Constitution, and the son of the United States minister to England’s Court of St. James.

By 1861, Rush had earned “an enviable reputation as a cavalry officer of the regular service.”[5]  He was a veteran of the Mexican War and was well-respected for his service in the artillery during his eight year-long career in the Regular Army.  Responding to President Lincoln’s initial call for volunteers, Rush sought a commission as a brigadier general and command of the Commonwealth of Pennsylvania’s volunteer artillery units.  One of his supporters wrote, “Rush is not only in every aspect highly qualified for the command, but a gentleman of high tone, calculated to raise the character of the troops under his lead, if to reflect more honor on the state than the office can confer upon him.”[6]  Another soldier recalled, “Col. Rush was an excellent organizer and instructor, having but few superiors, if any…He was well versed in all the requirements of the Quartermaster, Commissary and Ordinance Departments…His memory was excellent; he could call every member in the regiment by name.  He was exacting as to neatness and a quick appreciation of the qualities necessary for an ideal soldier.”[7]

Despite these qualifications, Rush’s application was rejected.  Instead, Gov. Curtin authorized him to raise a cavalry regiment, which would become known as either the 70th Regiment of Pennsylvania Volunteers or the 6th Pennsylvania Cavalry.  Rush was mustered into the 6th Pennsylvania Cavalry on October 5, 1863, for a term of three years.[8]  He immediately set about organizing and outfitting his regiment, personally recruited most of the 750 members of the regiment and appointed many of his own officers.[9]  Tested in battle, this regiment proved to be one of the elite cavalry units of either side of the conflict.

Those officers included: 25 year-old Maj. Robert Morris, Jr., a great grandson of the financier of the American Revolution and former first sergeant of the First City Troop; Capt. George G. Meade, Jr., son of the eventual commander of the Army of the Potomac; Capt. Charles E. Cadwalader, scion of one of Philadelphia’s most influential families; Lt. Frederick C. Newhall, who would write several important historical accounts of the regiment’s service; Lt. Thomas Gregg, cousin of the governor, and younger brother of Brig. Gen. David M. Gregg, who commanded a division of the Army of the Potomac’s Cavalry Corps for much of the war. They also included Capt. Henry C. Whelan, who would leave behind a stirring personal account of his participation in the great cavalry battle of Brandy Station fought on June 9, 1863, also came from the ranks of Rush’s Lancers.  Counting young George Meade, five officers from the Lancers would serve as staff officers at the Army of the Potomac’s headquarters.  More of Maj. Gen. George G. Meade’s staff officers came from the Lancers than from any other regiment.[10]  Most of these dashing young men were college educated, and many were graduates of the University of Pennsylvania.  A literate and intelligent group, these men helped form the nascent regiment.

While some of the officers of the regiment had served in the Philadelphia City Troop, most of the recruits were raw city boys, unaccustomed to riding and caring for horses.  Nearly all of them had to learn their trade—including how to care for their horses, and how to execute difficult weapons drills before they could even consider venturing into the field.  Unlike most of their comrades in the mounted service, the men of the 6th Pennsylvania were armed with lances, weapons which had been successfully used in the Mexican War and in Europe.  Rush’s fellow Philadelphian Maj. Gen. George B. McClellan, the first commander of the Army of the Potomac, was particularly enamored of Napoleonic tactics, as the lances had been successfully used in the Napoleonic wars.  Further, McClellan and his West Point classmate Rush had served together during the Mexican War and knew each other’s abilities well.

While many of the Union’s new volunteer cavalry regiments went into service in the summer of 1861, the Lancers were only being formed in the fall of that year.  Consequently, in November, 1861, McClellan sent a note to Rush which asked, “How would you like to organize your regiment as lancers.”  Rush responded immediately, “…Your wishes would be my choice.  The material of my regiment is fully equal to the lance.  I would consider the selection an honor.”[11]  Since there were no other weapons available to the men of the 6th Pennsylvania, Rush had little choice but to agree to McClellan’s request.

Each man received a nine-foot-long wooden lance tipped with an eleven-inch long steel blade.  The lances, copies of an Austrian pattern, each weighed about eight pounds, and were topped by a scarlet pennant, which became a handy target for Confederate sharpshooters while Lancers served picket duty.  This weapon proved cumbersome and impractical in the wooded terrain of the eastern seaboard; Corp. Joseph Blaschek of Company M later recalled that the lances were “a decided nuisance in a wooded country.”[12]  Another trooper wrote, “the officers like it, but the men do not, and the officers wouldn’t if they had to use [it]…”[13]  The lances also made the men of the regiment something of a laughingstock among the rest of the Federal army.  Col. Alexander Biddle of the 121st Pennsylvania Volunteer Infantry wrote home to his wife, a first cousin of Richard Rush, “I was told today that their little pennants are called ‘hospital flags’ derisively.”[14]  Certainly, the lances set the men of the regiment apart, but they proudly wore the name Rush’s Lancers.

McClellan believed that it would take two years to adequately train volunteer cavalry, and few in 1861 believed that the Rebellion would last that long.  Consequently, there was a major debate among the high echelons of the Federal command about how to properly use and arm the many volunteer cavalry regiments raised in the summer of 1861.  McClellan was biased against volunteer cavalry, and believed in late 1861, “For all present duty of cavalry in the upper Potomac volunteers will suffice as they will have nothing to do but carry messages & act as videttes. [emphasis added]”  A week later, McClellan requested that no more volunteer cavalry regiments be raised throughout the North, since their role was unclear, and there were questions about the army’s ability to mount and arm the new recruits.[15]  Thus, the role of the newly recruited Rush’s Lancers was undefined as the fall of 1861 progressed.  As its ranks filled in September and October 1861, its officers and enlisted men awaited their first assignment, wondering what their roles would be in the coming war.

The men established a training camp in the northeast part of Philadelphia called Camp Meigs, wherein they began learning to be soldiers.  Shortly after Smith’s enlistment, on October 30, 1861, the unit received its regimental flag in a stirring patriotic ceremony featuring a speech by Col. Rush.[16]  On December 4, a parade was held through the streets of Philadelphia.  The regimental historian, Chaplain Samuel L. Gracey, recorded:

This was one of the finest cavalry displays ever witnessed in [Philadelphia], and the only time that a regiment of Lancers was ever seen on its streets.  The lance being new and highly burnished; the scarlet pennon bright and attractive; the new uniform, and the tidy appearance of men and horses, all combined to render it a brilliant and imposing pageant.[17]

After dignitaries reviewed the troops, Governor Curtin made a lengthy and patriotic speech, stating, “You go to vindicate the history of the past, and to make that of the present.”[18]  Ready for action or not, on October 28, 1861, Secretary of War Simon Cameron had ordered the Lancers to come to Washington and report to McClellan for orders.[19]  Although Rush was ordered to “bring…[his] regiment with its organization…to Washington without delay,” it took more than a month for the command to march.  Energized, the Lancers embarked on trains and traveled to Meridian Hill in Washington, D.C., where they established Camp Barclay, named for their patron. 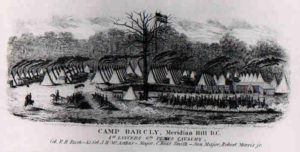 By December 16th, the entire regiment had reached Washington.  There, the erstwhile Lancers set about drilling in earnest.  By Christmas, the men missed home.  Lt. Theodore Sage of Company B wrote home on December 24th: “All the boys in the tent are setting around wishing that they could be in Philadelphia for a few hours but wishing will not do much.”  The men did the best that they could to enjoy their first Christmas away from home, and then earnestly began preparing to be soldiers.[20]  It was clear that political pressures would bring a spring campaign for the newly christened Army of the Potomac, and the new cavalrymen had to be ready for the ardors of the field.