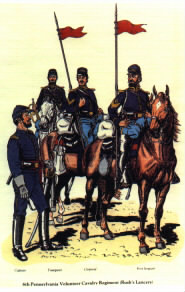 The men of the Sixth Pennsylvania were the cream of Philadelphia society. Most of the officers came from the leading families of the City of Brotherly Love. Many of them served in the First Troop Philadelphia City Cavalry, a militia unit that was originally formed to serve as George Washington’s personal body guard during the Revolutionary War. These bright, talented young men left their mark on many battlefield of the Civil War, earning them the proud title of “the Seventh Regulars.”