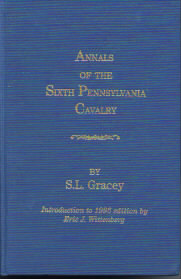 In 1868, the regimental chaplain of the Lancers, Samuel L. Gracey, published a fine history of the unit.  Providing a comprehensive overview of this fine combat unit, Gracey’s book was out of print for more than 100 years before it was reprinted by VanBerg Publishing of Lancaster, Ohio. 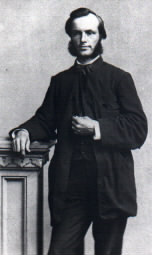 Rev. Samuel L. Gracey was born in Philadelphia in 1835.  He was educated at Boston University, and was ordained in 1857.  The young pastor served in his native Philadelphia until his appointment as chaplain of the newly formed Sixth Pennsylvania Cavalry in 1861, a post he held until 1864.  Gracey also held the post of chaplain of the First Division, Cavalry Corps, Army of the Potomac.  He briefly served as chaplain of the large prisoner of war camp located in Rock Island, Illinois, and rejoined the regiment in the spring of 1865, just in time for the regiment to be mustered out of Federal service.

After the war, Chaplain Gracey returned to the Philadelphia area.  After publishing his fine regimental history, he served as pastor for a number of different congregations until 1890, when he was appointed U.S. Consul to China, a post he held for various periods until 1897.  Gracey received the Decoration of the Double Dragon from the Chinese government for his service in suppressing the Boxer Rebellion.  He died in Boston in 1911, and was brought home to rest in Mt. Moriah Cemetery in Philadelphia, where he lies under a simple gravestone that reads, “Soldier-Clergyman-Diplomat”.